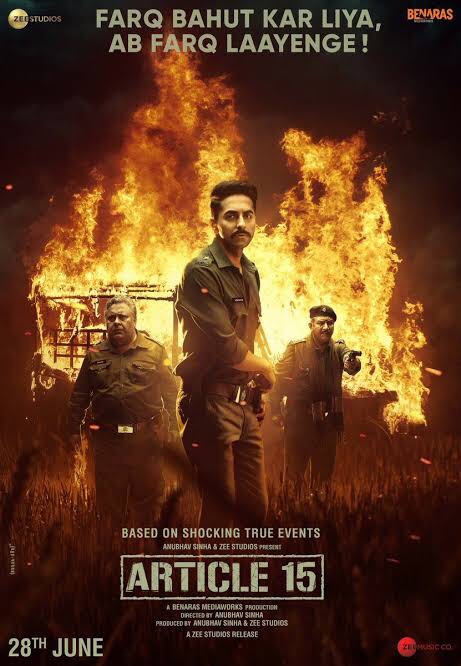 Movies are a rollercoaster ride that have the tremendous power to entertain and to teach. They can be a powerful tool to bring about effective social change. A well-made film – especially one with a compelling narrative and a well-crafted outreach plan – can serve as a catalyst to change minds, encourage viewers to change entrenched behaviors, and start or reenergize social movements.

Although it can be surprisingly difficult to make a firm connection between the power of a film and social change (considering that films are seen as a form of entertainment), not all films need to be drivers of social change. Some only aim to entertain and share a compelling story.

Having said that, here are the three top reasons why Article 15 directed by Anubhav Sinha is the need of the hour.

1. Based on the socio-political situation of India, the lives of police officers are followed. In a country where discrimination is everywhere, whether related to race or caste, the officers embark on a journey of acceptance and change. This movie is a reminder that we need to change our mindset and our actions on how we treat others.

2. Article 15 is inspired by the Badaun Gang rape and murder case in which two teenage girls from a backward caste were found hanging from a tree. Initial investigation suggested that the girls, who were cousins, were brutally gang raped and killed. However, the local police and CBI later concluded that there was no sexual assault and the girls committed suicide.

The roots of our society are rotten and we need more films like ‘Article 15’. Let’s support good cinema.

You can watch the trailer here: