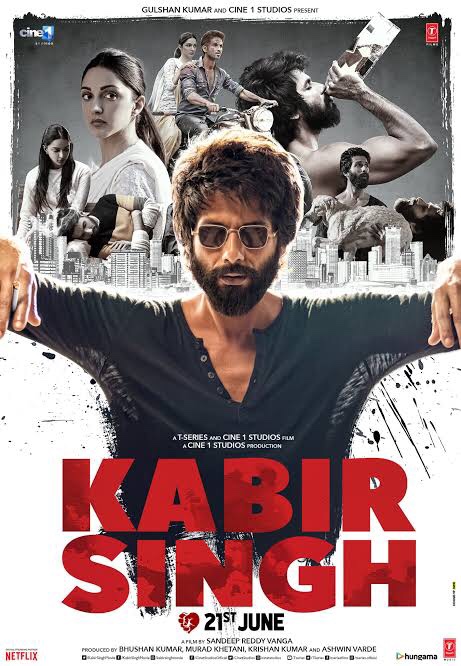 One can’t help but fall in love with “Kabir Singh”, the film as well as the eponymous title role, even though you don’t walk out of the cinema hall with a smile. If you fall in the category of the audience that believes cinema is meant to entertain, maybe this is not the film for you. You might as well watch a David Dhawan film.

If you like the kind of cinema that moves you, quite literally shakes you from within, “Kabir Singh” is for you. By the end of the film, it stirs up an emotional storm deep inside with its raw, intense and honest portrayal of love and suffering.

In the opening shot, we are introduced to Kabir and Preeti, and we’re told they are two bodies united by one soul. But theirs is not the kind of love story we are used to, especially Hindi audiences who are used to cheering for 50-plus stars romancing heroines half their age, singing duets in the Alps.

The love in “Kabir Singh” is pure, unabashedly bold and hard-hitting. It touches the soul in ways it can’t be explained. It gives the story a modern-day Devdas twist, while making the overall cinematic experience a journey to remember for a long time.

This is the story of the lead character Kabir Singh, and yet there isn’t a story, a structure to be precise, to follow and anticipate what might happen next. It’s the rise, fall and rise of Kabir, and his journey of love and suffering, is nothing short of poetic and heart wrenching.

Writer-director Sandeep Reddy Vanga doesn’t make us sympathise with Kabir’s character, and that’s a relief and achievement by itself. He makes us understand Kabir’s love and pain from a very personal and subconscious standpoint, and in doing so, he strikes an emotional chord.

It’s not the number of lip-locks or the use of expletives that make “Kabir Singh” a brave film. What really makes it a brave film and its director, a man with guts, is that it ventures into a space hindi cinema has dared to enter and I doubt if it will ever. It shows that any story, when told with conviction, will be accepted and celebrated. It is a remake of the Telugu film “Arjun Reddy” released in 2017.

Sandeep and Shahid, as director and hero, make the film for what it is, and both have paved the way for a new chapter in Hindi filmdom. If it was “Newton” and “Manto” last year, it’s “Kabir Singh” in 2019, and these films assure there is light at the end of the tunnel.

As much as the film belongs to Sandeep, who is also its writer, it equally belongs to Shahid Kapoor, who is the life of “Kabir Singh”. Shahid breathes life into the character and it’s impossible to imagine anyone else in his shoes. Be it his passion, love, and rage; he portrays these several layers of his character with unparalleled realism.

Kabir’s performance as a college-goer with serious anger issues or as the alcoholic surgeon will leave you in awe of his versatility in pulling off such diverse avatars with ease, as if it was child’s play.

We get to learn more about Kabir – his strengths, his weaknesses and flaws – from every character around him.

“Kabir Singh” is not a film; it’s an experience that’ll stay with you. This is a very personal story of love and suffering, aided by beautiful cinematography and terrific music, particularly the background score.

At 190 minutes, there isn’t a single lull moment in the film and it hooks you, quite literally till the end. This is the most original, experimental and daring work to come out Hindi cinema in a long time.