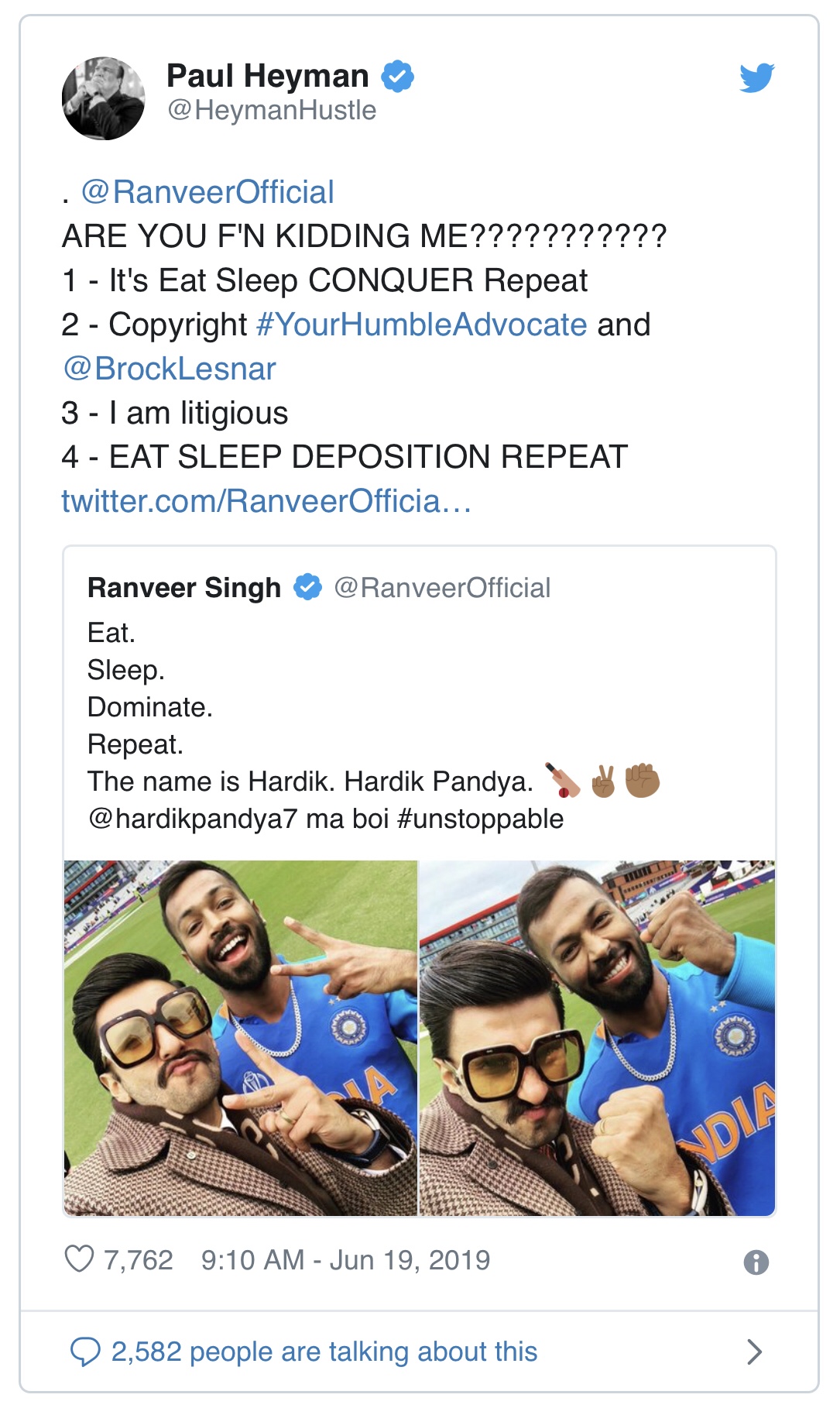 Brock Lesnar’s advocate Paul Heyman has sent a notice to Ranveer Singh for apparently using his catchphrase ‘Eat, Sleep, Conquer, Repeat’, in a twisted manner. During the latest India-Pakistan cricket match that took place on Sunday, Ranveer managed to steal the limelight with his high voltage energy in the commentary box and later with his Instagram posts where he shared pictures with some of the popular cricket legends and current team members.

From posing for a selfie with Sachin Tendulkar to dancing with Gavaskar, Ranveer posted it all on his Instagram feed. However, one of these updates caught the attention of Heyman.

In a post where the actor can be seen sharing a selfie with Hardik Pandya, the caption read, “Eat, Sleep, Dominate, Repeat”. He also shared the photo on Twitter. Reacting to the caption, Lesnar’s advocate retweeted the picture and wrote, “@RanveerOfficial ARE YOU F’N KIDDING ME???????????”

However, the twist in the story is that Ranveer did not exactly use Heyman catchphrase. In fact, the advocate himself pointed out in the same tweet that his catchline is “It’s Eat Sleep CONQUER Repeat”, which he has the copyright for.

While many view the reply as mere warning, and others believe that Heyman has taken things one step further as he has served a legal notice to the actor for using the catchphrase which was popularised by Lesnar inside the wrestling ring.

In his recent tweet, tagging a report by a publication that said that the advocate “warned” the actor, Heyman clarified that it wasn’t just a warning and that he has actually sent a legal notice to the advocate.

“I didn’t warn. I served noticed. And while I applaud @TheStatesmanLtd for their coverage of #YourHumbleAdvocate and @BrockLesnar, I must stress that I am not a manager (what an outdated, antiquated term). I am an #Advocate. And I’m the best #Advocate in history,” he tweeted.

While the celebrity advocate has been constantly tweeting about the incident, the Bollywood actor is yet to give an official statement.